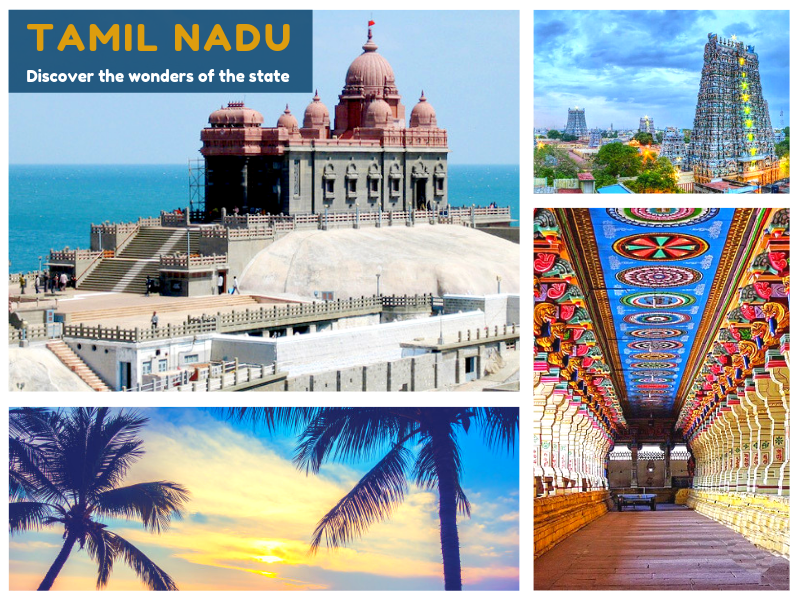 Tamil Nadu, the state in the southernmost part of India is the eleventh largest Indian state by area and sixth largest by population. Bordered by the union territory of Puducherry, and other South Indian states of Kerala, Karnataka and Andhra Pradesh, this bewitching state is best known for Dravidian-style Hindu temples, awe-inspiring beaches, wildlife sanctuaries and many rejuvenating hill stations.

If you have plans of moving to Tamil Nadu, then, don’t miss the chance to pay visit to some of its predominantly major attractions that are listed below-

If you are an animal lover, then, you’ll surely love to visit Mudumalai National Park, which is situated in the north-eastern part of Nilgiri Hills or blue mountains and is home to a myriad of endangered species—Bengal tiger, long billed vulture, Indian leopard, Indian elephant, amongst others. The place is also rich in flora, which can be categorized as—tropical moist deciduous, tropical dry deciduous and southern tropical dry thorn.

Desirous to see nature at its best? Then, Hogenakkal waterfalls are a must-visit for you! Located on the Kaveri river in the small village of Dharmapuri, the waterfalls offer a breath-taking view and is a perfect choice for weekend getaway. In addition to waterfalls, Hogenakkal also boasts of a magnificent Crocodile Farm or Crocodile Rehabilitation Centre, aimed at sheltering this rare species.

Also known as Toothukudi or Tuttukkudi, Tuticorin is a place that offers an eclectic combination of stunning beaches, captivating ports, soul-enriching temples and splendid wildlife sanctuaries. So, if you are on a look-out for a perfect holiday destination, then, Tuticorin is the apt choice for you!

Further, Tuticorin is an industrial city of Tamil Nadu, thus, if you belong to the manufacturing or other related sector, then, shifting to this profit-building city will be a wise decision. And being the trusted local packers and movers in Tuticorin, we can help you move swiftly and safely.

The southernmost point of Indian peninsula and the meeting point of three oceans—the Bay of Bengal, the Arabian Sea and the Indian Ocean, Kanyakumari is famous for its mesmerizing views of sunrise and sunset over waters, and the following places-

Vivekanand Rock Memorial: The iconic monument built in 1970 in the honor of Swami Vivekanand, who is believed to have attained enlightenment here.

Wax Museum: Situated in the city of Baywatch, this one-of-its kind museum houses wax forms of many national and international personalities and is replica of its famed counterpart in London.

Vattakottai Fort: Built in the 18th century, this glorious fort offers panoramic view of the Bay of Bengal, the majestic hills of Western Ghats and sparkling black sand beaches.

In addition to this, Kanyakumari is also one of the well-developing cities of Tamil Nadu, having a considerable literacy rate, thus, making it the most favorable place to stay. Hence, if you wish to move to this amazing city, then, avail our personalized home shifting services in Kanyakumari.

Apart from the above-mentioned places, Tamil Nadu is also well-known for its beautifully-sculptured temples, symbolic of the state’s rich cultural heritage. Some of its most renowned temples are-

Also known as Udhagamandalam or Udhagai, Ooty is a popular summer retreat that harbors—Ooty Lake (a huge artificial expanse of water with pleasure-seeking boat house), Government Botanical Garden (created in the 19th century that features ferns, orchids and prehistoric fossilized tree), Government Rose Garden (that has nearly 2,000 varieties of roses) and St. Stephen’s Church (one of the oldest churches in Nilgiri district).

Set in an area of granite cliffs, forested valleys, lakes, waterfalls and grassy hills, the town situated at nearly 2,000 meters above sea level, encompasses Kodaikanal Lake (the artificial lake created in the 19th century that features a boathouse with row boats and pedal boats), Coaker’s Walk (the beautiful lake), Silver Cascade Falls (the picturesque area that features a steep waterfall in a lush landscape), Bryant Park (the recreational area that offers elaborate pathways for walking and/or cycling), and many Christian churches including the Anglican Church of St. Peter.

Situated at an altitude of 1, 930 meters, Coonor offers jaw-dropping view of the Nilgiri Hills and the Catherine Falls. Along with this, the hill station is famous for Sim’s Park (the botanical retreat founded in 1874 that comprises of a wide variety of trees, plants and flowers), Highfield Tea Factory and Dolphin’s Nose Road (an enormous rock formation that offers panoramic view of the dazzling Catherine Falls).

Furthermore, apart from Tamil Nadu, Kerala is another fast-growing South Indian state. To get a glimpse of this culturally-rich part of South India, click here: https://bit.ly/2V8ugu4