Top 07 Reasons Why People Love To Live In Kolkata | PMRGO 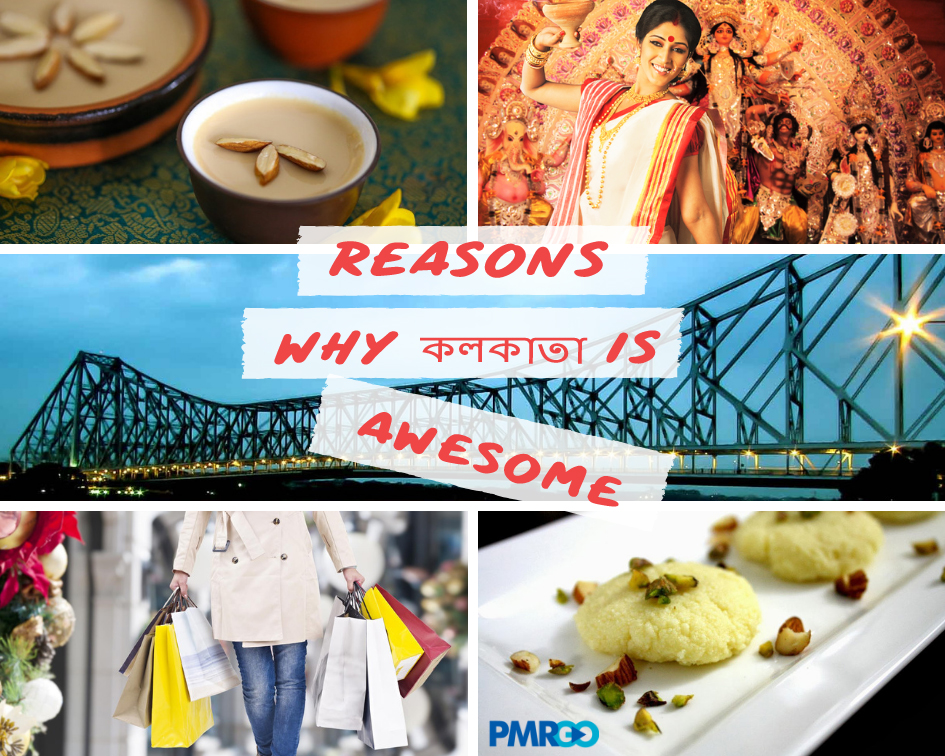 Planning to relocate Kolkata? Well, we’d like to let you know that you are already on your way to making a good decision. Why? Well, Kolkata- The City Of Joy is growing by leaps and bounds in terms of economy and infrastructural development. The nick name of Kolkata truly captures its real essence. This city indeed displays hospitality, warmth, and a sense of euphoria and to experience it, you have to see it.

If you are moving to Kolkata and just settling out in your new home and wondering where to go, what to do, this article is for you. As a beginner in Kolkata, this guide will help you to plan your visit in Kolkata with some of the must to do things. So, are you ready to explore Kolkata? Let’s go.

Kolkata was the first capital of India until 1911, when it was shifted to Delhi. The name it holds today hasn’t been its original name though, formerly known as Kalikshetra, the land of Goddess Kali, thereafter Kalikata, and finally the British christened the name of Calcutta to it and only recently has it been renamed to Kolkata.

Kolkata- the Cultural Capital of India is a heaven for foodies and has an irresistible magic no other Indian city can compete with and when it comes to food, the magic only amplifies to another level! The connection of Bengali and delicious food is invincible. From snacks to sweet dishes, the list of delicacies is never-ending and they have never failed to impress anyone. From Kathi Rolls to Kabiraji, Mishti Doi to Doi Maach, Calcutta Biryani to Basanti pulao, Shutli Kabab to Daab Chingri, the list is endless.

Not just pocket friendly food, this place is the destination to fine dining as well, try authentic Bengali food try Bhojo Hori Manna and for Mughlai cuisine try Arsalan or Zeeshan. Moreover, the city is always bustling with pubs, night clubs and restaurants. Park Street, one of the posh localities of Kolkata is the house to some of the cities oldest and popular restaurants and clubs. Mocambo, Peter Cat, Trincus, Olypub are few to name. They are also Kolkata attractions that drive travelers crazy with their varied range Indian and international cuisines.

Kolkata offers affordable property prices. One of the biggest perks of buying a property in Kolkata is that property prices are much reasonable as compared to other major cities such as Delhi, Bangalore and Mumbai.

The entire city is a piece of architecture, history and art. Years ago, the city serves as the capital of India and even today, the city is known as Culture Capital Of India. Kolkata has aptly stored the heritage structures, buildings, colonial walls and historical artifacts prevalent during the British rule. The city also exhibits typical Bengali culture, which is especially favored by those who love food, music, fine arts and literature. The city is a pilgrim’s paradise too. Kalighat Kali Temple, Belur Math, ISKON Mandir, Birla Mandir, Dakhineshwar Temple, are prominent pilgrimage centres that remains occupied by both locals and tourists throughout the year.

Worried about high rents, higher property prices and expensive food? Move to Kolkata because it has been listed as one of the cheapest cities to live in the world by Mercer’s Cost of Living Survey. The city is considered to be one of the cheapest metro cities to live in. Day by day, it is still growing in terms of commercial and industrial development. Several leading banks and public enterprises are headquartered in Kolkata, which gives employment to the people.

Shopping is always fun, isn’t it? Clinically proven to be a great stress buster, shopping helps you to de-stress after a long day at work. And when you visit Kolkata, it becomes mandatory. This place is a paradise for shopping and there’s every kind of things for every kind of people. Peddling everything from inexpensive clothes to reasonable souvenirs, here places offer good bargains and value-for-money deals. A little shopping with an affordable rate can be experience at Vardaan Market, Metro Plaza or the AC Market and if you want to buy the best wedding attire then Bada bazaar is your heaven. Look ahead to get a glimpse of budget shopping places in Kolkata what to expect when you go about looking the best objects the City of Joy has to offer.

Nothing can compare to Durga Puja celebrations in Kolkata. It is a grand celebration, an exultation of spirit. From households to residential complexes to the neighbourhoods, everyone gets ready to welcome Maa Durga in their own way. People don’t sleep and decked up in finery, enjoy the revelry to the hilt. Its five days of celebration with themed pandals and traditional Puja, food, friendship and creativity. This part of the country seems illuminated from the sky as the city is bathed in lights. It’s a way of life for the locals and one must visit Kolkata during the Durga Puja to experience it firsthand. This is a magical festival and one must experience this at least once to know the magic in it.

There are lots of other things to do in Kolkata. It’s an amazing city and you are going to love it and people here. If you are yet to relocate and searching for relocation companies then contact PMRGO.

What according to you is the most exciting thing to one can do in Kolkata? Please comment your answer.